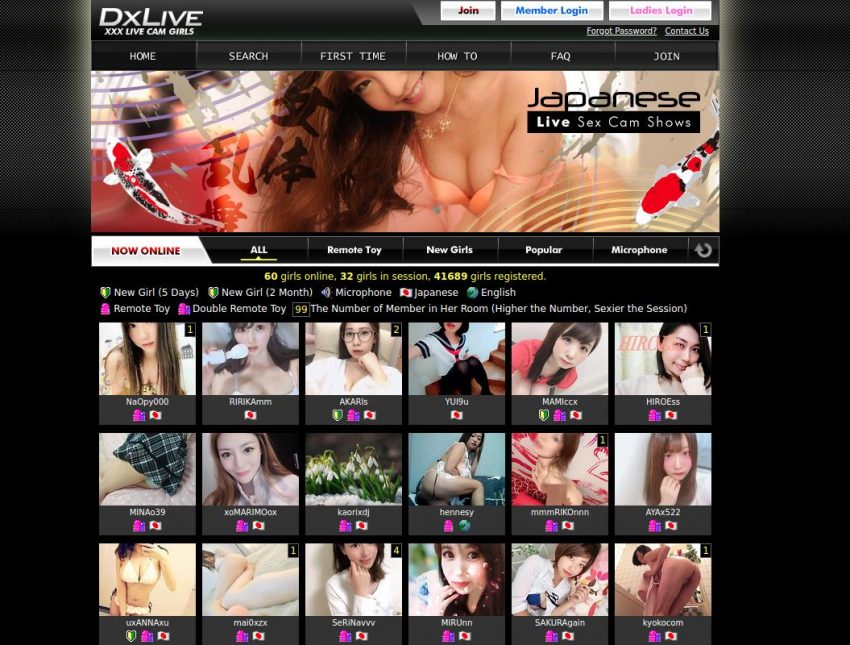 Japanese Live Cams are grown exponentially compared to other Asian sex cam sites. From the looks of it, DxLive is a good place to watch Japanese sex cams.

One of the critical things we usually face in DxLive is the language. More than 85% of sex cam models know only Japanese and followed by other Asian languages.

So, we can understand DxLive needs a massive improvement on that, and let’s check out everything we need to know about Japanese sex cams.

DxLive: Can We Trust this Japanese Live Sex Cams Site?

DxLive is a good start for Asian adults to check out the different sides of the Japanese adult entertainment industry.

From the looks of it, I must say DxLive.com could have done better work on the website theme.

We can see an awful lot of ads clearly spoiling the user’s interaction on the site.

We can check out the number of]girls currently online, having private sessions, and a total of registered models.

DxLive is a dedicated Japanese sex cam site and we haven’t seen many competitive brands for that. So, the market is huge, and did DxLive sex cams capitalize on the potential? Yes and No.

DxLive takes great pride in sustaining as one of the best Japanese live sex cams sites on the market. Nevertheless, they could have captured a larger audience by now but the looks of it show a different story.

Hikaru1131 is one of tens of thousands of models on the DxLive cams site. Just keep in mind while it’s not a scam, it’s definitely a replicated site whereby videos are fed from a parent platform.

Let’s look at some of the best and worst features of DxLive,

How to Play: Clicking on this option takes the user for registering on this site for free. The Main Menu explains the Purchase points clearly,

The Registration process is not simple and straightforward compared to other best sex cam sites. I remember signing up for Streamate (review at the link) for the first time 6 years back and even back then it’s easy and simple.

Girl Reviews: I’m not particularly a big fan of giving reviews to sex cam models. If I enjoy their company in cam shows, I’ll keep them in favorites and watch them perform often.

Giving away reviews to one set of models obviously decreases the cam shows for other models and that’s not healthy.

Ranking: A ranking for Japanese cam girls is visible on the main page. We can check the rankings of girls who are available online and offline as well. I would rather see a monthly ranking than a daily ranking.

Anyway, DxLive must certainly think about this option and update it better.

Here is the list of gifts we can see in DxLive.com,

D2Pass Members Site: An unique ID that is shared to users after registration is done on DXlive. With that ID, adult cam users can access all the D2Pass sites mentioned in DxLive. I.e One login to access many niche sex cam sites.

DxLive News: DxLive must update this section. Most of the news coming away is outdated in DxLive.

DxLive Blog: Like news, the blog contents are not maintained properly. Readers will find a difficult time understanding all this.

DxLive Ads: We do understand Advertisements are part of money-making in sex cam sites, but they should not be placed in a disturbing manner. DxLive needs massive improvements here.

The general rule as an adult sex cam user, don’t stick to one sex cam site if you’re not particularly happy about the performance. I have seen tons of Asian sex cam models in Chaturbate & Flirt4Free (review at the links).

Trust me, the above two sites are not Asian-based cam sites and still have the finest sex cam models around the globe. For those who find it difficult to cope up with the Japanese language in DxLive, you might have to check those two I just mentioned above. It’s free to watch.

Here’s how the home page of the DxLive site looks.

Here’s how the pricing is distributed in Dxlive sex cams,

I wish I could ponder all the great things about DxLive for cam users, but I have to be honest, DxLive is a good Japanese sex cam site for locals.

Because I can hardly see other reasons for the success apart from models.

The DxLive experience is not great at all, the user interface is confusing and there is not much mobile-friendliness too.

If you’re a Japanese adult who likes to go naughty and watch sex on cams, then DxLive.com could be your platform.

It is very subjective to pick just one adult webcams site as the best and so we try to avoid doing that.

Instead, we focus on being an information hub for consumers looking to learn more about the various adult webcams and video sex chat sites.

I suggest you peruse the site, check out our tables, and read the comparisons of adult webcams sites. If you want to read our rankings here is the list of the best cam sites.

Also, be aware that the most valuable resource we offer is our detailed adult webcams reviews. We offer reviews on more than 1,000 different live sex cams sites; more than any other website online. We were the first site to call out and identify the thousands of duplicate and clone adult cam sites.